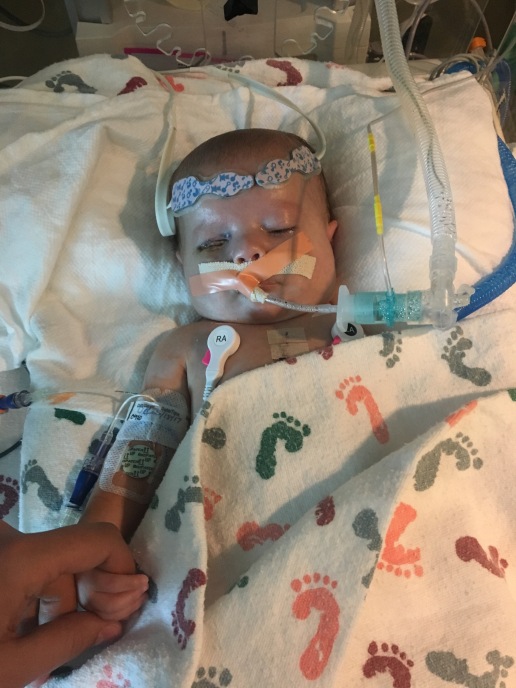 One year ago today I wrote my first blog post about my brother’s death. Just two months later, I was pregnant with sweet baby Joshua. I started thinking, maybe God’s timing in this was that He wanted me to not just share my brother John’s story but Joshua’s story too, and that is what I am going to continue to do.

The last three weeks have been monumentally stressful. On May 5th, Joshua had the cyst taken out of his eye and he also had a G-tube put in because he wasn’t able to drink enough from the bottle. We thought it would be maybe one more week and Joshua would be home with us. After a few days we learned Joshua had contracted a super bug which led to pneumonia and he could not be taken off of the ventilator. The Dr. in the NICU said through tears she didn’t know what else she could do for him and she wasn’t sure what they could do if he got worse, except maybe put him on ECMO (a machine that stops lung function and oxygenates blood for him through a machine). They transferred him to the PICU unit. It was the next day when his CT scan came back and the Dr. told us he had tracheal stenosis. One segment of his trachea was about the size of the tip of a pen. Therefore if any mucous whatsoever clogged up that air way he could die. Surgery was scheduled for four days later to perform a slide tracheoplasty, to make his airway wider. That was maybe the longest four days of my life. During this time he could hardly be moved without his oxygen levels plummeting. The first night in the PICU, we decided to spend the night with him. I went to go wash my pump parts and came back to code blue alarms going off and the Dr. doing CPR on my son. I can’t explain in words what it was like to see that. He was literally life and death the entire weekend, sedated and medically paralyzed, everyone just wanting him to make it to surgery.

Surgery was a success, but just two nights later I was awakened in the middle of the night by the doctor telling me she had just performed CPR on Joshua for 6 minutes. One of his chest tubes had dislodged and started filling up his heart with lipids. It’s extremely rare that this happens. In the last three weeks, doctors have literally saved his life half a dozen times. I’ve realized, again, how little we really have control over in life. God really is in control.

Joshua has a pretty intense fan club at the hospital at this point. Doctors and nurses love him and continually say how much of a fighter he is. They all want him to succeed. Today he was taken off of the ventilator! It was so amazing to hear his little baby sounds and hoarse cries. I still haven’t been able to hold him in three weeks, but hopefully tomorrow we will be able to.

Something I have had to remind myself of lately, and pretty much every doctor has told us this at some point is, take BABY steps. Anyone ever seen the movie “What About Bob?” It’s a comedy about a mentally ill man who smothers his psychologist. His psychologist gives him this advice…

When life feels overwhelming…just take baby steps. Really, all of us should live more in the moment, more in today and less in tomorrow. Situations like this force you to.

One thought on “Baby Steps”