The next few days, weeks and months were covered in a haze of shock, intense grief, and media. I remember asking my mom on Tuesday night, the night of the shooting, if I had to go to school the next day. I don’t think I went to school for about a month afterward.

It was Thursday of that week I believe, that the Jeffco victim’s advocates came to our house and told us that John’s body had been identified. John’s girlfriend Michelle, immediately ran to his room, laid on his bed and cried. I took a lot of my cues from my parents. If they cried, I felt free to cry but if they didn’t, I felt I had to be strong as well. This was one of those times, I don’t remember them crying. My dad had to go and identify his body. His body hadn’t been ‘cleaned up’ yet. My mom couldn’t bear to go but I wanted to go. Obviously, no parent is going to let their eleven year old go and see their brother laid out, laden with bullet holes. I don’t know, I wanted to see John, the way he really looked, not caked with make up when I later saw him at the viewing.

I couldn’t tell you what day it was that we went to see John’s body laid out. It’s one of my most poignant memories. My mom was absolutely dreading it, but a friend of hers, who had also lost a child, said she should probably go and held her hand through the whole ordeal. Before we left for the mortuary, I wrote a letter to my brother, to put in his casket. Pat said, this isn’t goodbye Ashley, it’s just like saying, ‘see you later’. I wrote that in his letter.

When we went into the mortuary, there was a smell like men’s cologne, so strong. Today, if I smell something similar, the memories flood back. I could see my brother’s buzzed haircut from a distance and my heart started beating fast, as it does even as I write this. As I got closer however, I breathed a sigh of relief. It didn’t look like my brother, at least the John I knew. I remember thinking John would be so mad to have all of this make up on him! I realized how our bodies are just the shell. This wasn’t John, he wasn’t here. This was his shell, and his soul was with Jesus. I examined his face. There was a bullet hole close to his eye and my parents chose to have him wear a turtleneck (not something John would ever wear), to cover the damage the two killers had inflicted. He also wore a Packer’s shirt. An embroidered Chevy truck was on the inside of his casket. My dad commented that he wished he could have seen his feet, because my mom always said he had my dad’s toes. Again though, I don’t remember my parents crying at this particular moment, so I tried to hold in my tears. I laid the letter I had written, with a rose, on his chest. The thorn from the rose poked his hand, and I remember not wanting to hurt him but then reminding myself, he wouldn’t feel it anyway. This was goodbye…at least for now.

Both Pat and I confided to my aunt that the image of our brother laying in the casket haunted us for a while afterword. This would be the only memory that I would get flashbacks of. I would also get constant headaches because I am a very private crier. I hate crying in public so I would hold it in, many times trying to save it until I went to bed. Even then, I would sob silently, so I wouldn’t wake my parents. I think many kids who grieve feel they have to be strong for their parents. Anytime I would cry, I knew it just caused my parents more pain, so I tried really hard to be strong. 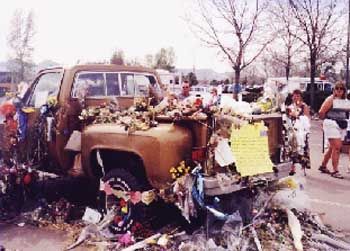 One thought on “Saying goodbye.”